The dust in our homes contains an average of 9,000 different species of microbes, a study suggests.

Researchers from the University of Colorado at Boulder analysed the dust found in 1,200 households across the United States.

They discovered that the types of bacteria and fungi varied depending on where the home was located, who lived there and whether pets were present.

This is really basic natural history we are investigating here

The research is published in the Proceedings of the Royal Society B.

Dr Noah Fierer, associate professor of ecology and evolutionary biology, who carried out the study, said: “This is really basic natural history we are investigating here.

“We have known for a long time that microbes live in our homes. What we are doing is now is old-fashioned science, to see how they vary across space.”

The study is part of a citizen science project called The Wild Life of Our Homes.

The scientists were sent house dust samples from 1,200 homes across the United States

Volunteers from 1,200 homes across the United States sent dust samples to the researchers.

They scooped up the detritus from the ledges above doorways – a spot, the scientists say, that is often overlooked while cleaning.

A genetic analysis of the house dust revealed a menagerie of microscopic creatures.

The researchers found that the average household had more than 2,000 different types of fungi.

These included well-known moulds such as Aspergillus, Penicillium, Alternaria and Fusarium.

However, the exact make-up of the fungal ecosystem depended on the home’s location.

“Most of the fungi we are seeing in the home appears to be coming from outside the home,” said Dr Fierer.

“They enter the home on our clothing, or through open windows or through doors. 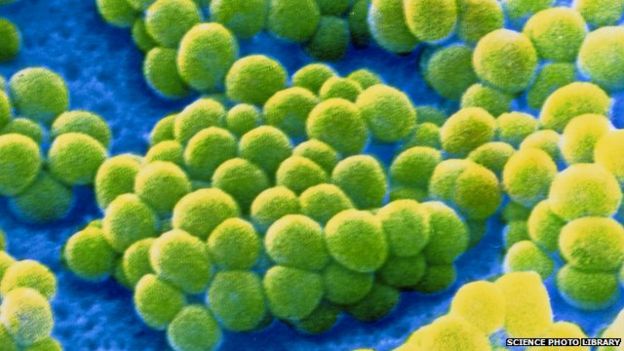 The researchers also discovered an average of 7,000 different types of bacteria per household.

Some, such as Staphylococcus and Streptococcus, were commonly associated with human skin.

However others, such as Bacteroides and Faecalibacterium, were linked to faeces.

But here, the species varied according to who – or what – was living in the house.

People do not need to worry about microbes in their home

“We found distinct bacteria in homes that had women and homes that were male-only,” said Dr Fierer.

“There are some kinds of bacteria that are more common on women’s bodies than on men’s, and we can see the impact of that on the bacteria found in house dust.”

“Bringing a dog or cat into your home really has a significant effect on the bacteria you find in your home,” explained Dr Fierer.

“It was surprising to us that it was such a strong influence – stronger than any other factor, stronger than where your home was located or the design of your home, for example.”

While the study was carried out in the United States, Dr Fierer said that the findings would be relevant for other parts of the world.

The researchers now want to find out how sharing our homes with these organisms could affect human health.

While some microbes may be linked to disease and allergies, they say most are probably harmless – and some may even be beneficial.

Dr Fierer added: “People do not need to worry about microbes in their home. They are all around us, they are on our skin, they’re all around our home – and most of these are completely harmless.

“It is just a fact of life that we are surrounded by these microbes.”